Any player, coach, team manager, team assistant, or spectator that exhibits behavior or conduct which violates rules established by the Police Activity League or which is otherwise reasonably determined to be unacceptable by the Commissioners and/or Directors may be subject to action to avoid harm and benefit the youth of the program. (08)

SPORTSMANSHIP/ROUGHING (06)
If a league director, commissioner or referee witnesses any unsportsmanlike act, the game will be stopped and the player and/or coaches will be ejected from the game. FOUL PLAY WILL NOT BE TOLERATED. A report on any such activity is subject to review.

Trash talking is illegal. Officials have the right to determine offensive language. (Trash talk is talk that may be offensive to officials, opposing players, teams, or spectators.) If trash talking occurs, the referee may give one warning at his/her discretion. If it continues, or if deemed as unsportsmanlike, the player, players and/or coaches will be ejected from the game in line with the rules on sportsmanship.

FIELD LAYOUT
The playing field is marked at 70 x 30 yards and lined to reflect the rules. (Grasshoppers and Peanuts may play on a smaller marked field for instructional purposes). (05)

Scoring
Touchdown: = 6 points
Extra points: The ball is dead after the attempt (no returns).
In the Grasshopper and Peanut Division – there will be no extra point attempts (05)

In the PEEWEE Division:
The five yard NO-run zone applies.
1 point (played from 3-yard line) must pass or
2 points (played from 8-yard line) with the option to run or pass

In the JAYVEE and Varsity division:
The five yard NO-run zone applies.
1 point (played from 5-yard line) must pass or
2 points (played from 12-yard line) with the option to run or pass

Note: 1 point to a 2 point decisions cannot change due to an accepted penalty. (11)

Safety: = 2 points. Ball carrier’s flag is pulled or runner’s body hits the ground, halting forward progress in their own end zone (includes fumbles in end zone). If at least one foot is completely across goal line in field of play when flag is pulled it is NOT a safety. (14) Change of possession occurs after a safety and the offense starts at its own 5-yard line.

​Defensive Penalties - Yardage Where Applied - Down if Accepted

Offensive Penalties - Yardage Where Applied - Down if Accepted

RULES / CHANGES
COACHES AND DIRECTORS MAY RECOMMEND CHANGES AND/OR MODIFCTAIONS TO THE RULES OF PLAY. RECOMMENDATIONS MUST BE OUTLINED IN WRITING AND SUBMITTED TO THE APPROPRIATE DIRECTOR OF THE DIVISION WHERE THE AMENDMENT MAY APPLY.
GOOD LUCK - HAVE A GREAT SEASON!!

PROGRAM OBJECTIVES
TO BENEFIT THE YOUTH AND THE PLAYERS, IT IS IMPORTANT FOR THE SUCCESS OF THE FLAG FOOTBALL PROGRAM THAT ALL PARTICIPANTS IN THIS ACTIVITY ENJOY EQUAL AND FAIR PLAYING TIME.

Team coaches must make every effort to insure that the players participate equitably (half game minimum) in game action. It is the responsibility of every coach to communicate the PROGRAM OBJECTIVES to the players and parents at the start of the season. (09) 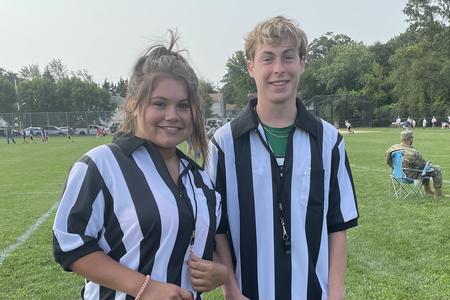